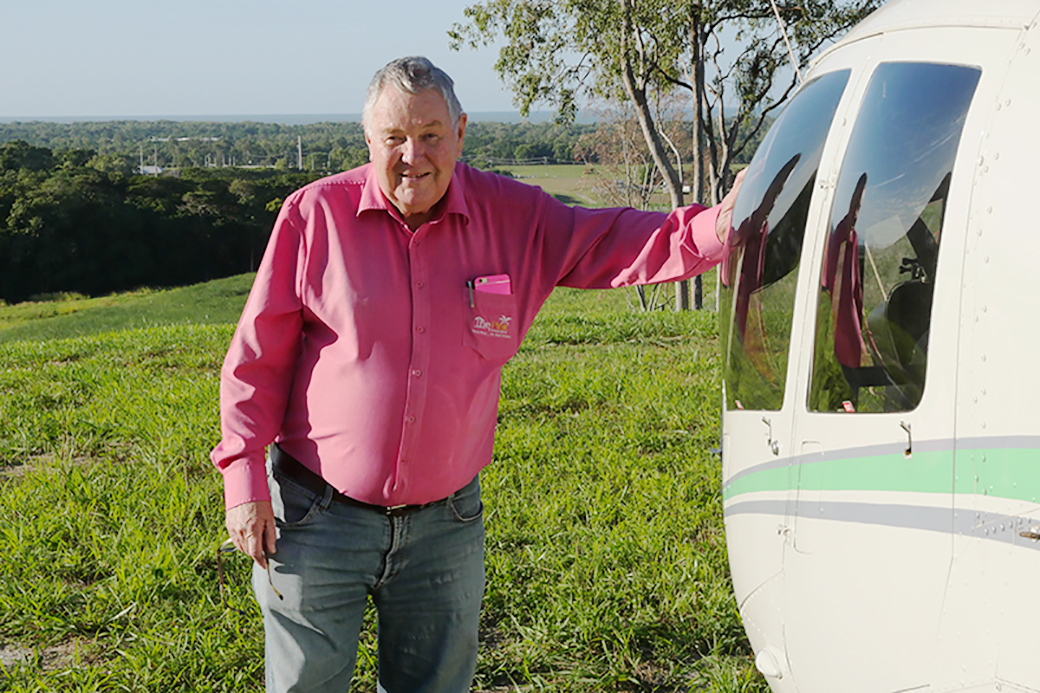 The man who shaped Port Douglas

For those of you who haven’t heard the name Tony McGrath, he is an extra-ordinary individual who has influenced this region for 33  years.  In fact, he has that unique attribute, passion,  that has allowed him to influence every region in which he has chosen to work over the last 65 years.

In 1974  he started his first  successful real estate business in Toronto, NSW and by 1979  he had two thriving offices in Toronto.  During that time as a keen fisherman he came up north regularly to compete in the prestigious annual Lizard Island competition.  He generally stayed in Cairns overnight but on each visit from 1982 he drove up to Port Douglas for a day trip. Inevitably, as so often happens to visitors to this amazing town, he and his wife became more and more drawn to the idea of living in Port.  Tony’s wife, Greer, actually went as far as to issue an ultimatum that she wanted him to sell up and move the family and business to Port Douglas.

Tony, ever the shrewd operator, realised that there might just be something in this transition because the now infamous Christopher Skase (Quintex) was getting  quite a reputation in the real estate market with his ambitious plans for the Sheraton Mirage Hotel and Resort  here in Port Douglas.

And Tony took the whole opportunity on board in 1986.

The McGraths came up for the usual holiday  in  mid 1986.  Tony decided that the first week would be spent in Port Douglas to see whether the transition plan made sense. As they drove into town the earthmoving equipment was reshaping the Mirage site - it had become a reality. He visited most agents in town  to see if anyone  would employ him because he really didn’t want to start a new business as he had done in Toronto.

Within 24 hours he concluded it would be easier to start by buying an  established operation.  He met the legendary Sno Morrish and purchased his fledgling business with a view to branding it L J Hooker. Within a few months of the family moving here in December 1986, he had expanded the Hooker office into a new development in Douglas Manor on Macrossan Street.

He had contacted LJ Hooker franchise boss, Barry Ryan, to see if they would grant him permission to expand their franchise region into Port Douglas.

Ryan replied, “Port where? that’s in South Australia isn’t it?”.  It was difficult to believe that Ryan didn’t even know where Port Douglas was but the organisation had not considered expansion this far north.  Tony laid out his plans and Hookers Queensland boss Graham Cooke approved a Port Douglas office.

The rest, as they say, is history with Port Douglas going into a golden era on the back of Christopher Skase’s Sheraton Mirage development until the pilots’ strike in about 1990 struck and crippled the soaring market. This was the first big downturn in the new Port Douglas . Those who hung in were rewarded by a gradual upward market recovery until along came the GFC of 2006/7.

To be fair, as Tony mentioned, there was a deciding factor that helped make his decision to move to Port. He was an hour outside Sydney, returning to Toronto, when an air hostess came to his seat and said there was a telephone message for him.  She said that his Newcastle property manager Murray would pick him up at Sydney airport.  Tony was bewildered by the message because, although it was very nice that Murray was going to meet him, he wasn’t sure that it was so important as to contact a plane mid flight to advise him or how it could happen.

He was rightly suspicious of the urgency of the message when Murray finally got up the courage to tell Tony that while they had been away their house had caught fire, and there was extensive damage.  As Tony reminisces, “I guess fate took it’s hand. Everyone was safe so I consolidated the move.”

So by December 1986 the move to Port Douglas was completed.  The speed of the McGraths move took even Tony’s wife Greer by surprise.  She said, “I thought we were going to talk about this for a week before the comp and then decide what we would do.”  Tony made it clear that when her ultimatum was issued, he had decided that he would agree and in his usual style he followed his instincts and they took him in exactly the right direction.  So he issued his own ultimatum and the McGraths sold their home and within six weeks had moved to Port Douglas.

The real estate market ran hot with so many people from down south, particularly Melbourne, buying heavily in Port Douglas because it was being promoted as the Noosa of tomorrow.  Development was generated by legends of Port Douglas like Christopher Skase, John Morris and Michelle Piat.  And even problems like the pilots’ strike and rogue developers could not completely destroy the progress of Port Douglas.

The effects of the strike were felt for almost eight years and it hurt badly but Port Douglas has a charisma that man-made problems cannot deter.  And by the 2000s activity was again at a very healthy level and even though by 2005/6 the  GFC bubble was beginning to burst there was still some business from late arrivers.

Tony has always been a successful operator and confirms that during his career he has been involved in over half a billion dollars worth of real estate across the Douglas Shire.   He believes that if you do your job right then the money follows.  He has never focused on or worried about commission.

His rule was: “Always concentrate on the deal.  If you don’t you’re doomed to a lot of disappointments.  That’s how to deal with the stress.  It’s people who make their own stress, not the business”.

He sold his  thriving LJ Hooker Port Douglas franchise in 2004 at the peak of the boom but continued to work for the buyers until 2009 when he left to start up his own agency again, which he is still operating between race meetings!!

Talking about the current market, he says the region has been through a couple of eras of fast profit but the truth of the matter is that real estate investment is about a seven to 10 year cycle. “It’s never been about a quick buck.  That kind of opportunism is difficult to plan but positive long term investment has a good track record up here,” he said.

“Agents must work for both seller and buyer.  Very often the seller doesn’t like the advice his agent gives him but you have to stick to what you believe is right.  In the long run both your buyers and sellers will appreciate your efforts”.

The new Marina development if approved will herald a great new era for Port Douglas. Tony stressed they  must be careful that they don’t fall for the same trap in which Christopher Skase fell by building too much commercial.  “Vying with the main street created overload and couldn’t be sustained.

That advice proved to absolutely correct.  I’m sure this advice will be taken into consideration by Crystalbrook when they develop the new Marina. They are good operators,” he said.

“The local Council must help here.  Development for the area is essential .  There is no room for anti-development. We need to provide a future by providing affordable land for our young people and tourism workers - they are the town’s future.  We are all green.  We wouldn’t live here if we weren’t green.  But there is a limit to the way green controls things and we are way past that point!   So development has to be generated carefully, controlled carefully but generated it must be.  There are a lot of things that need to happen and they are not.  We need to get a ‘balance of progress’,” he said.

Tony is careful with his health having had a couple of scares with his heart resulting in a successful heart bypass operation but he has no retirement plans.  Even at 80 years of age he doesn’t see any reason to slow down.  He did admit that he doesn’t drink cheap wine anymore.  Learning about good wines has become another passion and he is sure that it’s better for his health and wellbeing!

Over and above his business activities, he has always enjoyed his horses.  Right through his career he has owned race horses.  He has held various management and stewardship positions in the racing game and has lost none of his passion for the Sport of Kings.  His office is littered with trophies and plaques displaying his racing success through the years.  He maintains that horse racing can be useful for business.  So many people have a share in a horse and so many more would like to have a share in a horse so it is an opportunity to meet a lot of people and they are often looking for investment opportunities.

His lust for life and his continued drive demonstrates that whatever he takes on both in business or leisure, he doesn’t do things by halves.  If a thing is worth doing then it’s worth doing well.

Having spent a wonderful couple of hours with this unique individual I realised that he only operates with proficiency, enthusiasm and determination.

He doesn’t suffer fools and I suspect he never will.  If ever an advisory board was considered for the Douglas Shire, then I would proffer an idea that the Shire would find no better participant, perhaps even leader of the group, than Tony McGrath.  This community means so much to him that we need to acknowledge his experience and expertise and I’d put a bet on that!